To be united in one self. Shadow, energy, body dead or alive, reflections, times. 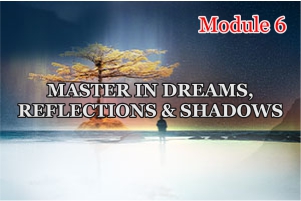