THE CHESSBOARD “BECOME THE PLAYER OF YOUR OWN LIFE” Discover the magic contained in the chess board and how by knowing this secret formula you can become the master player of your own life. What if life could be seen as a “game”, symbolized by the chess board? One that correlated not only with the mathematics of the Aztec Calendar but also operated as a microcosm of the entire Universe! And knowing this, you could change your destiny with a few simple conscious movements.

It is remarkable that on two different continents ancient peoples discovered the principles of the Universe, however, despite similar mathematical knowledge, they created different symbols to represent their discovery. In Central America, it was the Aztec and Mayan Calendars, and in the East, it was the Chessboard that had similar principles. These are based on the measurement and motion of the universe and use the same numerical formulas.

Throughout ancient times, many ancient churches, palaces, and buildings of cultural significance have the chessboard design as a motif on the floors, as a powerful tool to influence the fate of the players. Checkerboard design remains one of the most powerful subliminal tools used in branding today. The board can represent the Universe; And by becoming a player of your own game, you can begin to conquer disease, addiction, and an ancient heritage that no longer serves your life or future.

You can begin to create the future you envision, strengthening and enhancing your energy. You will learn how to fulfill your dreams by planting them on the chessboard, the microcosm of the Universe. With Enochian Magic, learn to use the chess board for divination; and how with simple movements on the board, you can change the course of your life. By becoming a player of your own life, you will be able to: 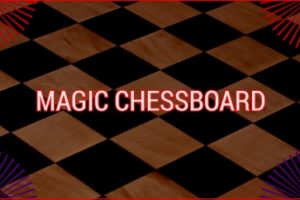