Firstly, the tradition shares the alchemist’s secretive principle that the Whole was created by the One, in this case Centeotl, primal energy, which then divided into two Ometeotl masculine and feminine energy. However, our tradition somehow differs with the alchemists in that they hold the Sun is their father, the moon is their mother who carries the wind in her womb and the earth is the wet nurse. The Toltecs left teachings, even older than the latter ones, still symbolised in the Nahui Ollin or four movements, which states that the illusion of everything we were leaves in 4 thus, representing the order of cosmic mother and mother earth as well as the 4 most important moments of the day, the moon phases, equinoxes and solstices, etc. Since we are all part of this creation, as humans we are made up of these four parts, that is; who we really are when we are self-conscious in the conscious state (tonal) or the unconscious state (nahual). Our energetic body or aura which is in turn divided into 4 parts:

1) Our mind and thoughts (tonal), the soul (teyolia) located in the left side of our heart.
2) The dream body we use to dream
3) The strength of life(ihiyotl) anchored to the liver and the legs.
4) Lucid dreaming- allows us to create life in this state when. we become conscious of two of our main parts and our fragmental one, the nahual, necessary to start off.

Now, you also need to acknowledge that the nahual or dream body is also made up of these same four parts; that the so-called unconscious is physically located in our real shadow and that you can interact with them. That creating a double of our energetic body and being able to use it not only in the dream state but also in the unconscious state allows you to get into your shadow, into your reflection which represents the past. When you do not modify your shadow, it becomes your future where mirrors come into being: back (to nullify things and energy) red (to heal and talk with the stars), blue (for the prophecies), golden (to create the present) and green (to recover paradise)
Don’t miss this immersion course which is definitely the most advanced course to fully understand ‘the self’ (I). See how the past turns into the future such as in the reflection. Learn practices which will change all former preconceptions and which will make your life as a dreamer much easier by realizing that it’s not only you who has come into lucid dreaming but also your nagual , the double of your energetic body, your shadow and your reflection. 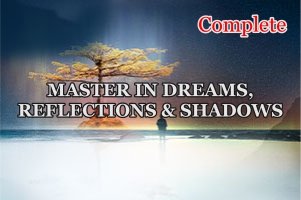